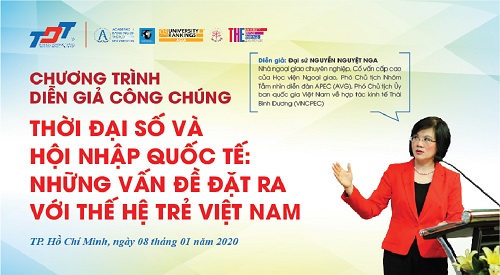 Digital Age and International Integration: Problems Posed to the Younger Generation of Vietnam

This is the topic of the January 2020 Public Speaking Program held at Ton Duc Thang University (TDTU) on 8 January 2020.

Participants: TDTU teachers and students in all faculties. Interested guests outside TDTU please register with the Organizing Committee before 7 January 2020 for easy arrangements.

Ambassador Nguyen Nguyet Nga is a professional diplomat with extensive experience in international economic relations and multilateral diplomacy. She is currently a Senior Advisor of Diplomatic Academy, Vice President of Vietnam in the APEC Forum Vision Group (AVG) and of Vietnam National Committee for Pacific Economic Cooperation (VNCPEC); Member of ASEAN Women's Group on peace and reconciliation.

Ambassador Nguyen Nguyet Nga has held many important positions in the Ministry of Foreign Affairs such as Assistant Director, Deputy Director of Southeast Asia - South Asia - South Pacific (from 1998 to 2003); Deputy Director of ASEM V National Secretariat when Vietnam hosted the 5th Asia-Europe Summit (from 2003 to 2005). From 2008 to 2015, she was appointed as Director of the Department of Multilateral Economic Cooperation; the first Female Director of the Ministry of Foreign Affairs to undertake international economic affairs, WTO and FTA negotiations; Deputy Head of Government Negotiation for Trade and Chief of Vietnam Senior Officials at Asia-Europe Meeting (ASEM). From 2015 to 2018, she held the position as Director, then Senior Advisor of APEC 2017 National Secretariat, Governor of Vietnam at Asia-Europe Foundation. She used to be sent to Vietnam Embassy in London (from 1982 to 1985) and Washington (2005 -2008). Currently, she is the Senior Advisor of the National Secretariat on ASEAN 2020.

She has participated in many international conferences and seminars such as the Wilton Park Conference (UK), the Salzburg Global Conference, the G20 Women's Summit, the ASIA Women's Conference, the APEC Forum on women and economics, etc. Furthermore, she has joined in writing articles, books and lecturing on policies of international economic integration and multilateral foreign relations of Vietnam, Asia-Pacific; APEC, ASEM, etc.